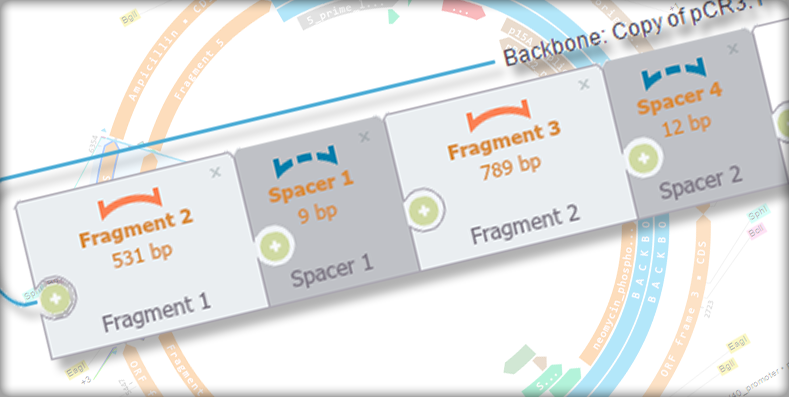 1 test tube, 2 or more DNA fragments, 3 enzymes. Sounds like a painless way to build your complex DNA constructs? That’s because it is!

Gibson Assembly allows for multiple DNA fragments to be assembled using overlapping sequences, all in one single reaction. Designed by Daniel G. Gibson of the J. Craig Venter Institute, the protocol has become an essential method for simplifying cloning experiments.

Gibson Assembly doesn't require specific restriction sites within a sequence to work. This means you have the freedom to assemble any sequence you want, without the constraints of traditional cloning methods. The result? Scarless assembly, greater efficacy when joining multiple fragments simultaneously, and the flexibility to use the backbone of your choice.

Here’s a guide on how to perform Gibson Assembly in three steps:

To ensure that assembly is consistent with your intended result, good planning is key. For this, you must be able to picture your completed design in order to check your sequences and primers. The easiest and most efficient way to plan your construct is to use in-silico DNA design tools like Genome Compiler. This allows you to easily edit and inspect your sequences as well as to better visualise your vector maps. At this point, it is time to decide if you wish to add other smaller sequences such as stop codons, ribosomal binding sites, and promoters. If you are not sure about which vector backbone to use, check out some useful tips here.

Primer design is the most crucial step in completing Gibson Assembly successfully. The method relies on adding homology to join fragments by their overhangs. In order to do so, sequences from adjacent fragments are added to the non annealing 5’ end of the primer. The homology of the overhangs can be added to one of the primers being joined or, alternatively, split between two primers to minimize primer length. The same applies when joining fragments to the backbone, which should be linearized at the point of insertion of the primers.

The homologous sequence should be at least 20-40 bp long. Generally, however, constructs with more that 5 fragments or involving fragments with more than 2 kb might require longer homology regions.

After you optimize your primer design, it is time to polymerize and purify the fragments. You should run a DpnI digest on the PCR products in order to remove the original DNA. The fragments should also be purified using a PCR or gel cleanup kit.

Gibson Assembly is accomplished by combining the fragments and the vector backbone with a mix of the following three enzymes:

The mixture is then incubated in a single test tube at 50°C. This temperature allows all 3 enzymes to work together. The reaction usually takes up to an hour to be completed, depending on the number of fragments involved in the assembly. The resulting fully sealed double-stranded DNA molecule can now be used for the molecular biology application of your choice.

Cloning with Gibson Assembly is easy but doing it with Genome Compiler is even easier! Seamlessly import your backbones and genes of interest directly into the Gibson cloning wizard, making it simple to simulate Gibson and assemble multiple fragments and backbone. Additionally, all primers are automatically designed for you. To learn more about it, check out our tutorial video. Happy cloning!

cloninggibson assembly
About the author