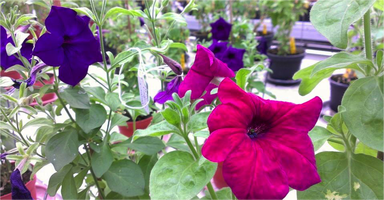 Ever deliberated over planting the red Dahlias there, the purple Hydrangeas there, or the pink Chrysanthemums here? Well, sooner than you might think, you could have all of the colors you want, all in one flower. Scientists at Revolution Bioengineering (RevBio) are working on applying biotechnology to consumer products by creating a unique flower that changes colors throughout the day. Keira Havens and Nikolai Braun at BioRev are working to make the field of biotechnology more accessible and appealing to the general public. They are doing this by creating Petunias that change color from red to blue and back to red throughout the day.

“Revolution Bioengineering grew out of the idea that biotechnology could be beautiful,”

says co-founder Nikolai Braun, “there is incredible work being done on practical technologies vital to a healthier, cleaner, more sustainable world, but most of these advances happen in a lab or as part of an industry initiative. The general public only rarely gets the chance to experience these innovations first hand.” In order to create these flowers, RevBio will be using two features already found in Petunias. The first is the molecule responsible for colors in flowers, called anthocyanin. Anthocyanins are pigment molecules that create the red, purple, and blue colors in flowers, and their properties can change based on the environment. The second is an internal clock plants use to track sunlight and regulate the expression of different genes. It works in a cyclical way, telling the plant when to start photosynthesis for example. RevBio is working to connect these two mechanisms– so that the expression of anthocyanin is connected to the natural cyclical rhythms of the plant, resulting in a plant that changes color based on the time of day. So far RevBio has successfully tested this pathway in bacteria and has moved on to working on single plant cells.

This is not the first time synthetic biology has been marketed to the public in the form of plants. The first such project was the Glowing Plant project, which used crowdfunding to raise $484,000 to synthesize a plant that can glow in the dark. This project is also underway, and seeds will most likely be ready later this year.

These projects serve the important purpose of reaching out to the general public and educating people about the potential of synthetic biology.

“By delivering a trait engineered specifically to amaze and delight consumers, we are giving people the opportunity to interact on their own terms with a genetically engineered organism, for the very first time,”

said Braun, “they can water it, they can watch it grow, and they can observe it and form their own opinions on plant biotechnology. We hope it allows people to judge the technology on its own merits.” If the public sees the beauty of synthetic products, this might open doors to acceptance of products with more wide ranging applications, such as vitamin-rich crops and plants that detect environmental pollutants.

“Petunia Circadia is just the start – we can imagine blue flowers, flowers with polka dots, flowers with new scents and textures to brighten up the home and the garden… As we perfect our color technologies, we’re looking forward to developing more sophisticated, functional plants for use – detecting environmental pollutants or reducing pest infestations just by changing the color of a flower. There is a colorful future ahead!"

biotechnologycolor-changingflowerssynthetic biology
About the author