Most known cancers in humans have 1000 to 5000 mutations to its DNA, but scientists located at the University of Cambridge and the Wellcome Trust Sanger Institute, headed by Elizabeth Murchison, have just published their discovery of an 11,000-year-old cancer with 1.9 million mutations in its genome, making it the oldest cancer to be discovered. This cancer is called Canine transmissible venereal tumor (CTVT). It is a sexually transmitted cancer among the dog population. Instead of the transmitting agent being a bacteria or a virus, unlike most human cancers, it is actually transmitted by the cancer tumor cells. In order to research the success of this cancer’s longevity Murchison focused on its genome. Murchison’s team was able to track one of the mutations in the cancer in order to measure how long it has existed.

“Since the genome of the cancer also contained the genome of the dog with which it had originated, they were also able to cull some facts about the dog as well. Scientists say it would have been similar to a Husky today, and likely lived in an isolated area, as the cancer only began to become common around the globe in the last 500 years or so. (Misra)"

What makes this cancer so unique, and the explanation to its longevity, is that unlike most cancers that spread from a single cell in a host and remain in that host, CTVT has only grown once and spread from dog to dog. There are two reasons why this cancer has been around for so long. Firstly, In order to be transmissible the CTVT cancer cells have to become durable as to quickly spread from dog to dog and endure the outside atmosphere. Secondly, this cancer is highly elusive towards a canine’s immune system, making it very difficult to be fought off. What is remarkable about this cancer is that any form of this cancer found today contains the same exact genome as the cancer that was created in the first dog 11,000 years ago. In fact, they were able to some-what accurately depict, by studying the cancer's genome and its mutations, what that original ‘patient-zero’ dog looked like: 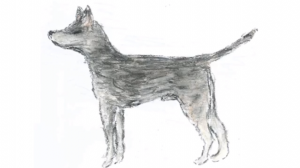 Read about this article here

Read the publication of the research here

cancerDNAgeneticsgenomesynthentic biology
About the author