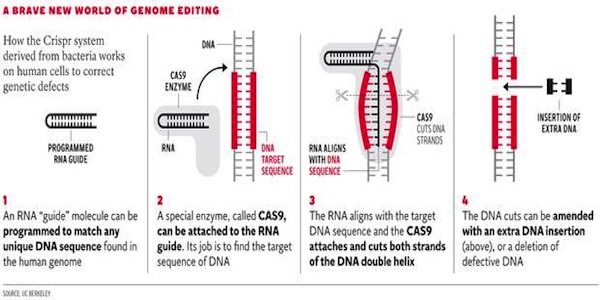 The incredible and revolutionary development of a new technique called Crispr allows scientists to engineer any part of the human genome with extremely accurate precision. This development is being called a milestone in medical science because the technology has the capability to treat a range of diseases from cancer and AIDS, to inherited genetic disorders such as sickle-cell anaemia and Down syndrome. This means that scientists can effectively alter a human gene in such detailed precision and at any position on the 23 pairs of chromosomes on the DNA without making any mutations.

Many scientists are calling this discovery a “game-changer” in the field of synthetic biology. The technology is so accurate that “incurable” diseases, like HIV, can be treated. Further, although controversial, Crispr would allow scientists to correct gene defects in human embryos. This would allow a scientist to “correct” Down syndrome before the child is born. This discovery can be used for gene therapy on sperm, eggs or embryos to actually eliminate an inherited disease and effectively alter the abnormal DNA of all ensuing generations. Imagine, a family that has suffered from genetic hereditary diseases like breast cancer, Alzheimer's, or even Celiac’s disease can now alter the DNA of a specific gene to stop the spread of these diseases. However, this concept has led some to fear that we are “playing g-d.” Critics point to the possibility of “ designer babies” which has in turn led this technology to be deemed illegal in Britain and other countries as well. However, if using this new technology continues to be proven safe, accurate and reliable, it will be harder and harder to argue against its use. Who could tell a parent not to use this gene therapy when there is an option to save their children from terrible suffering?

Crispr also has the ability to be applied to agriculture and the engineering of plants and animals, accelerating the development of genetically modified crops and livestock.

Here are what some experts are saying :

“The efficiency and ease of use is completely unprecedented. I’m jumping out of my skin with excitement,” said George Church, a geneticist at Harvard University who led one of the teams that used Crispr to edit the human genome for the first time.

“Crispr is absolutely huge. It’s incredibly powerful and it has many applications, from agriculture to potential gene therapy in humans,” said Craig Mello of the University of Massachusetts Medical School, who shared the 2006 Nobel Prize for medicine for a previous genetic discovery called RNA interference

Isn’t is amazing...once upon a time, humans thought the earth was flat. Look at what we’ve done now!

Want some more? Check out this video to see the Crispr technique in action.