Great article by Science News about Synthetic Biology and some of the leading figures in the field: 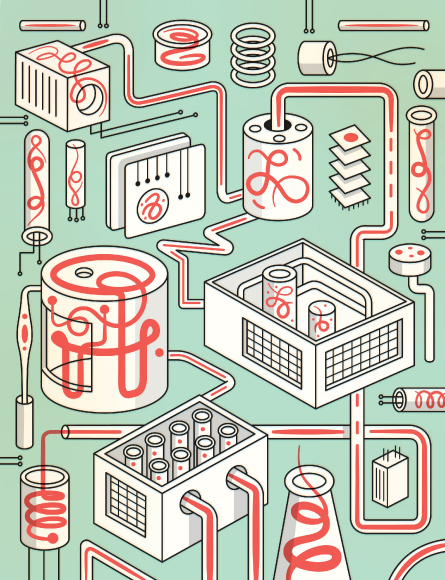 Very good story ending with a paragraph about how Synthetic Biology can solve many of the grand challenges we face:

Solving hunger
Synthetic biology may help farmers feed more people. For millennia, crops have been bred with an eye toward improved harvests. Later, genetic manipulations upped plant yields and made crops more resilient against drought and other hazards. Now, scientists are looking at tweaking photosynthesis. “You don’t need to increase the biomass of plants by that much to solve the food problems across the world,” says Harvard’s Pamela Silver. One idea is that new enzymes could boost the amount of energy that plants can extract from the sun. Another suggests there might be a totally different way to pull usable carbon from the atmosphere. In the April 2012 Applied and Environmental Microbiology, Silver and colleagues reported engineering a bacterium to churn out up to 200 percent of its initial cellular mass as sugar. The work could be used to develop plants that produce more food per harvest.

Making energy
An early hope for synthetic biology was that it could wean society off fossil fuels. Engineering microbes to churn out hydrocarbons would presumably be a lot cleaner and more climate-friendly than extracting and burning coal and oil. Since 2000, the U.S. Department of Energy has poured millions of dollars into funding synthetic biology biofuels research, such as new types of algae to secrete biodiesel or other engineered fuels that don’t have to be pumped from the ground. So far, progress has been limited.

Treating patients
One of the most obvious goals of synthetic biology is to make people healthier. Engineering new drugs, or designing cells that can target disease inside the body, has been a goal of the field from the start. An early success involved creating a bioengineered version of a drug to fight malaria. Researchers managed to engineer a species of yeast to produce large amounts of a chemical precursor to the anti­malarial drug artemisinin, typically harvested from the wormwood tree of east Asia. The pharmaceutical company Sanofi is now working to bring the process to market. In another take on better health, engineered human cells could locate and eliminate cancerous cells by tricking the evil­doers into committing suicide. Though the technique has been demonstrated in a lab dish, it is still far from tackling cancer in real human patients.

Reviews give green light, encourage caution
Engineering life is not the sort of thing you can do quietly.

Ever since biologists first started piecing together genetic components, ethicists have pondered the implications. Could an artificial form of life turn out to have unexpected consequences, like invading the environment or otherwise running amok? And what about bioterrorists who might want to get their hands on synthetic bugs and put them to nefarious uses?

A March 2012 report from Friends of the Earth, the International Center for Technology Assessment, and the ETC Group — nongovernment organizations that have worked against genetically modified organisms, among other causes — calls synthetic biology “an extreme form of genetic engineering” that is “developing rapidly with little oversight or regulation despite carrying vast uncertainty.” Not since the 1990s’ birth of nanotechnology, the engineering of the very small, has a new technology elicited such ire.

Nearly every major safety review of synthetic biology, though, has given the field a cautious green light. A 2010 government review, requested by President Obama after Craig Venter booted up a cell with a synthetic genome, suggested there was no need to create a new government body to oversee synthetic biology research. Rather, the report’s authors promoted the idea of “prudent vigilance” — paying attention to what’s happening in the field without regulating it out of existence from the start. “With these unprecedented achievements comes an obligation to consider carefully both the promise and potential perils that they could realize,” the report said.

The Woodrow Wilson International Center for Scholars in Washington, D.C., has also started a scorecard for tracking public discussions about synthetic biology. An update last July found that many U.S. federal agencies had begun taking steps to learn more about the field, as recommended by the presidential report. Still, the center says, more work is needed. —Alexandra Witze

Cleaning up
Microbes are already used at oil spill sites, eating petroleum components and converting them into less hazardous by-products. Designing synthetic versions that can do the job quicker, and perhaps break down more stubborn pollutants such as pesticides and radioactive waste, would be a logical next step. Researchers at Spain’s National Center for Biotechnology have designed circuits capable of redirecting microbes to feast on industrial chemicals instead of sugar.