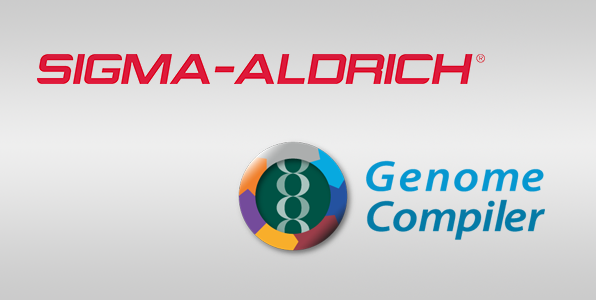 Genome Compiler propels forward, enhancing user experience by expanding their database versatility with addition of a new vector collection from Sigma-Aldrich. This collaboration will provide simpler processes for Genome Compiler users while also adding additional options for plasmid and vector usage. Genome Compiler solidifies its “all in one platform” stance to streamline user activity from start to end, providing all necessary components in one place.

By linking to Sigma Aldrich’s SnapFast™ Vector Collection, Genome Compiler enriches their database with standardized cloning and expression vectors that can easily be used for all popular cloning methods. Sigma-Aldrich’s SnapFast™ system consist of a collection of >1600 vectors that are fully inter-changeable, allowing users to transfer genes between vectors easily and simply. The collection gives Genome Compiler users access to dozens of options in promoters, signal peptides, reporter genes, and selection markers, which will maximize utility for the existing software, enhancing possibilities for users. "At Genome Compiler,” says Genome Compiler CEO Omri Drory, “we empower users with an intuitive and comprehensive software platform. With the new Sigma-Aldrich collaboration, we are closing the loop between research, design and information sharing.”

Genome Compiler’s aspiration of providing users with versatility and function all in a single software is being realized with this latest addition. Sigma-Aldrich’s Global Product Manager, Tonya Jackson, explains her vision: “At Sigma-Aldrich, we aim to work with others to improve the researcher experience. We are happy to offer the SnapFast(TM) vector collection engineered by Oxford Genetics, embedded in Genome Compiler’s intuitive design tools, with easy ordering on Sigma’s premiere e-commerce platform". Integrating Sigma-Aldrich’s repository with Genome Compiler’s intuitive and comprehensive design software will empower users to do more for their synthetic biology needs than ever before.